I'm trying to find my way back to my blog, it has been too long! So here goes... I can't do a daily sakura this year, but here are a few cherry blossom photos from my favourite spot - Asukayama in Kita-ku, Tokyo. 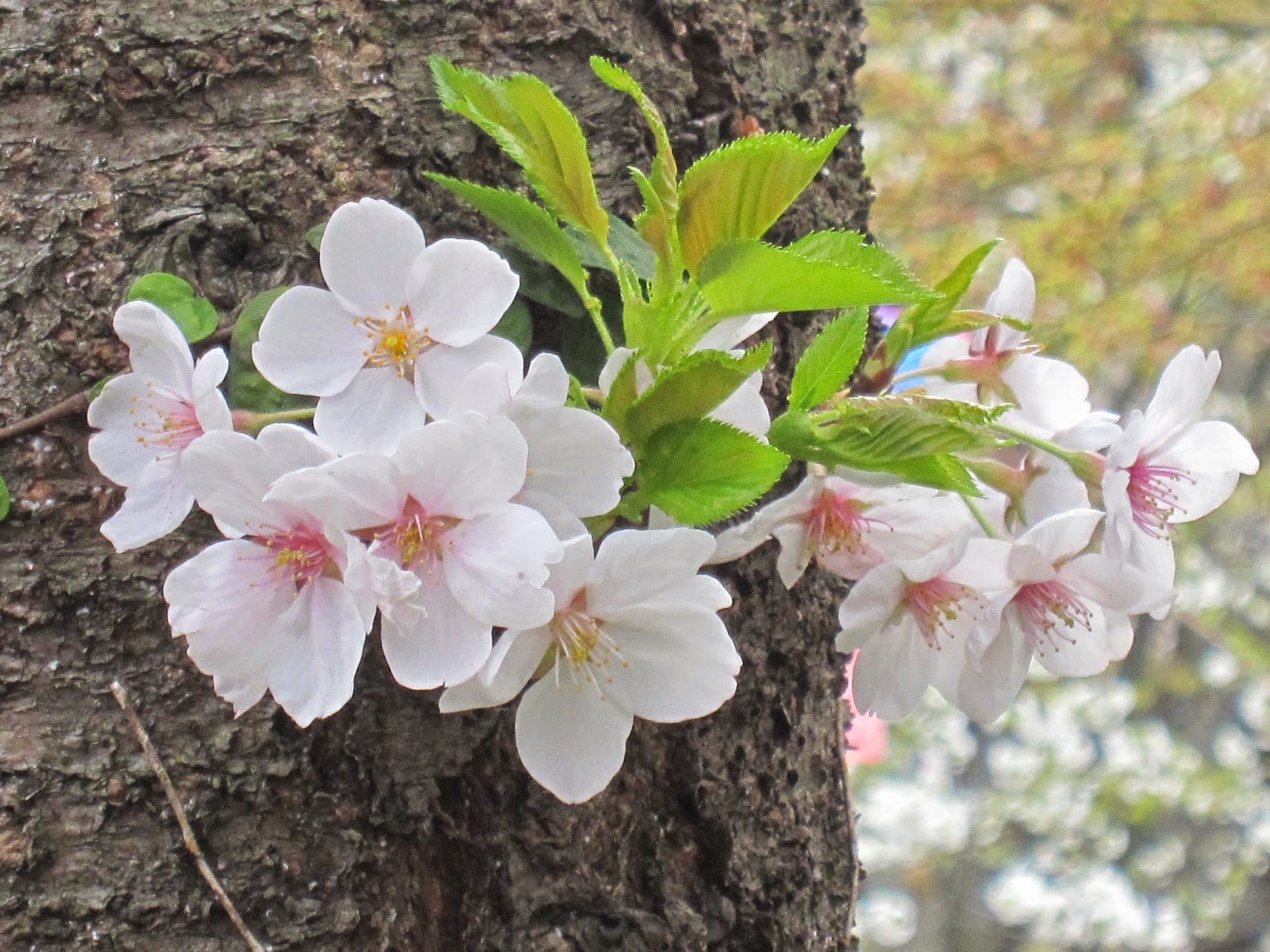 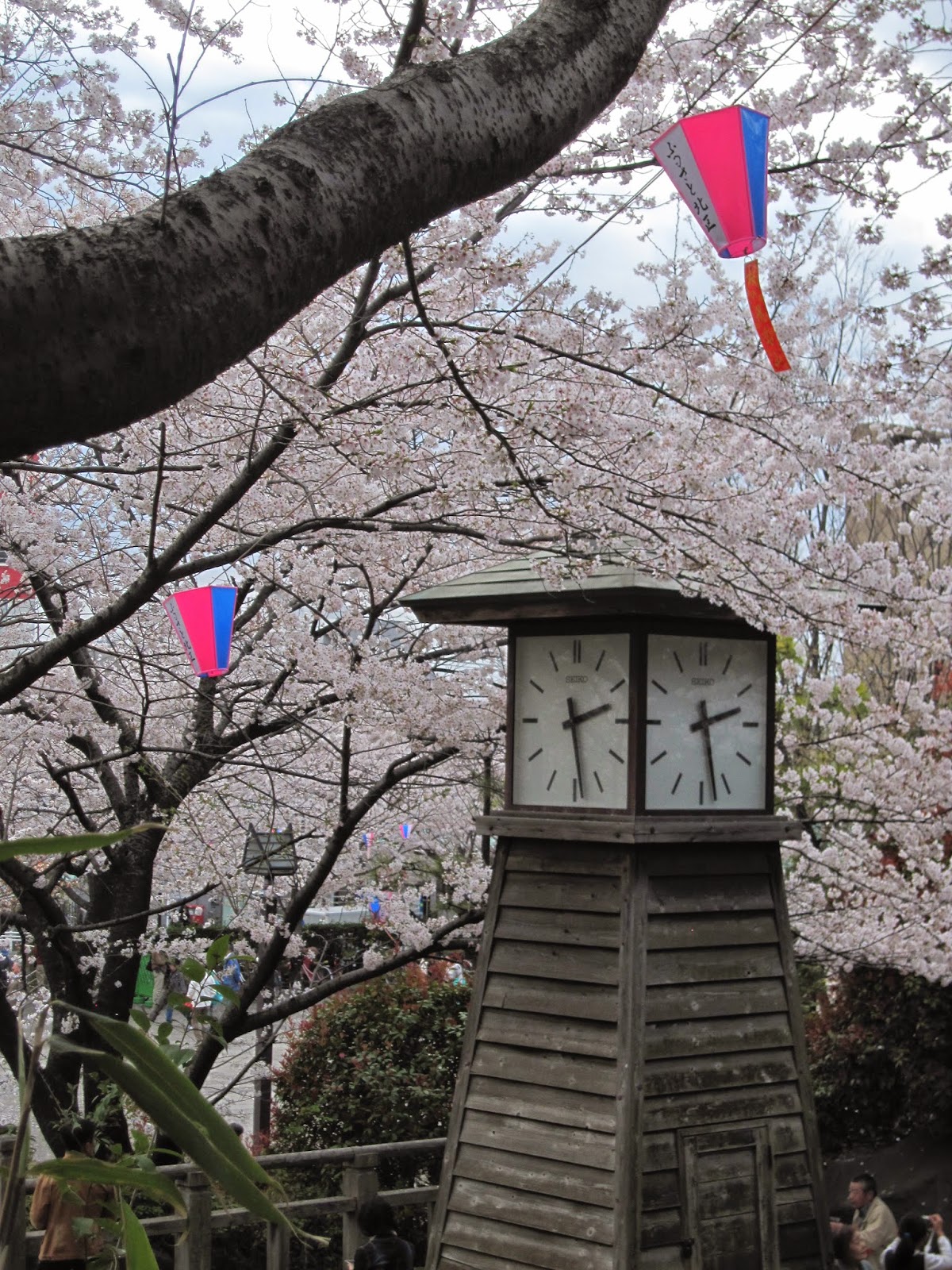 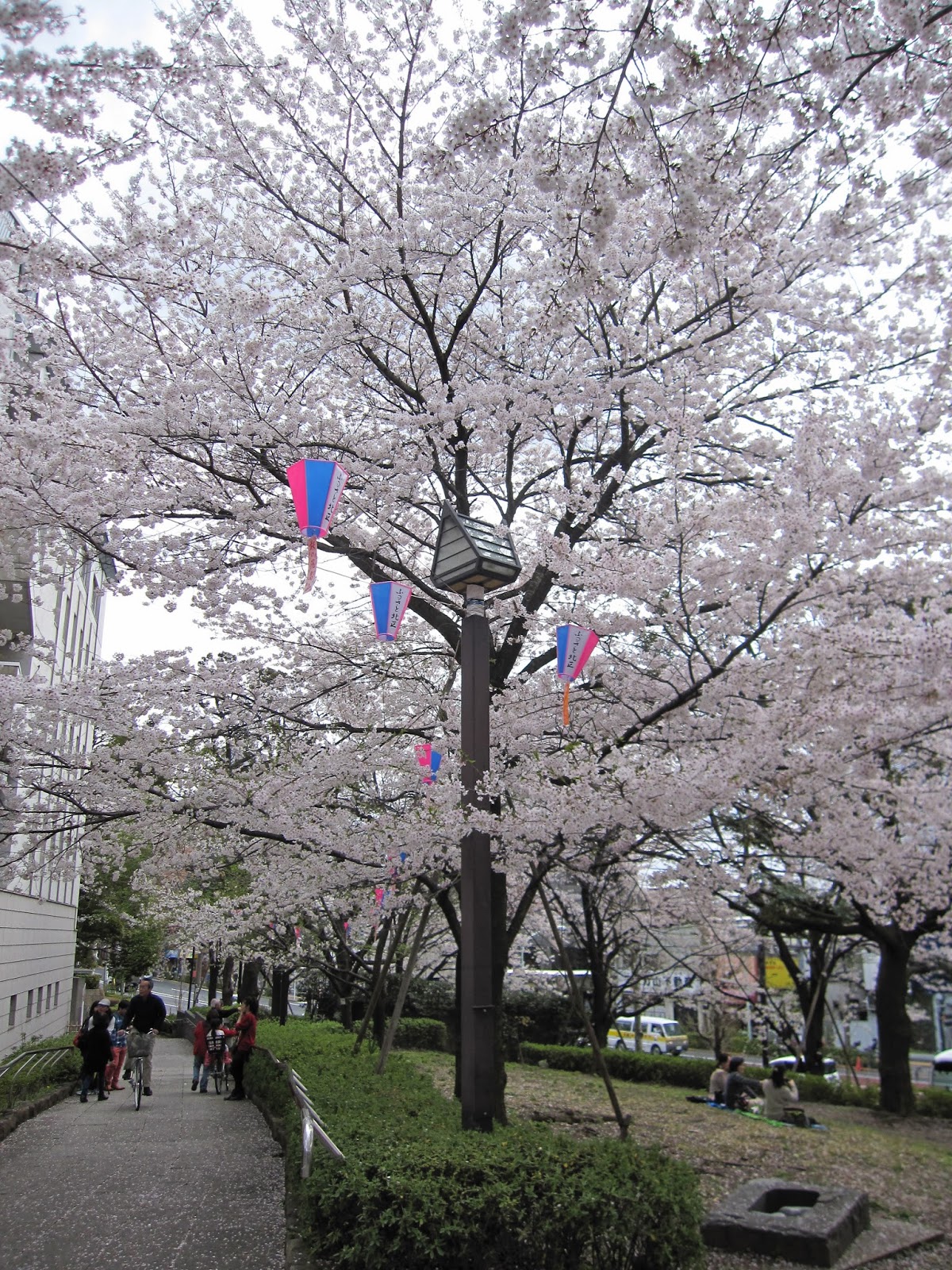 Posted by SomedaysSarah at 17:58 6 comments:

Because I'm a few days late for a Wordless Wednesday... A dragon waterspout from Fushimi Inari. 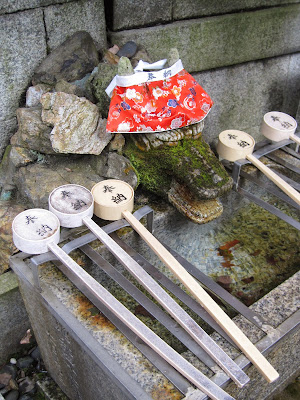 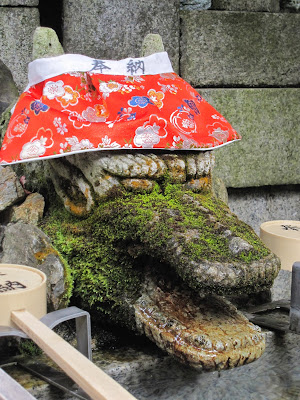 Posted by SomedaysSarah at 08:26 3 comments:

I spoke at an event on Sunday and because of the post-event drinking party they put me up for the night. On Monday I was to transfer at Kyoto to the shinkansen and head home, except I couldn't. Despite the mile long to-do list waiting for me at home, I couldn't just head straight home on Monday morning, it would have been such a waste! So I stashed my bag in a locker and hopped on the JR Nara line.

A few minutes later I was standing beneath the first of many bright orange torii shrine gates. 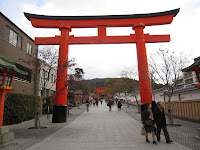 Thankfully the crowds thinned out the further I got up the mountain and, although the weather was grey and overcast with a bite to the wind, there were only a few intermittent rain drops and my climb kept me warm. 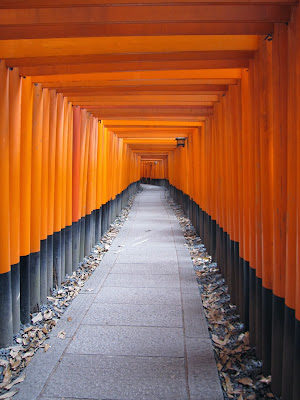 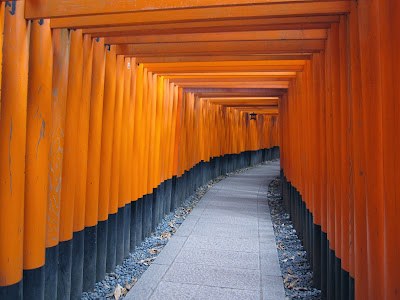 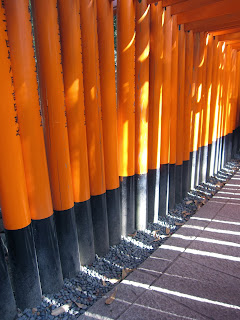 Even without my good camera Fushimi Inari is incredibly photogenic. Much of the route up the mountain is lined with bright orange gates, winding through the forest where a few stubborn maples still held on to their autumnal glory. 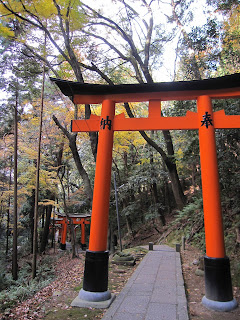 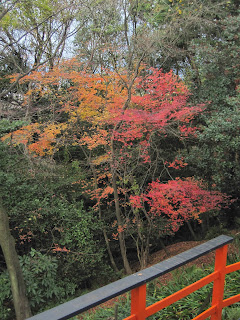 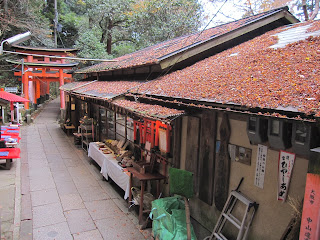 There was an older man repainting one of the torii and there were others festooned with wet paint signs and in various degrees of newly painted-ness. 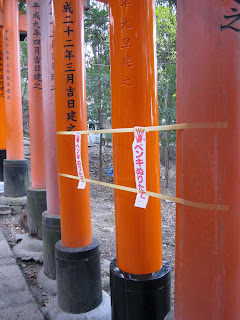 Then there were others that were obviously rotting from within and others that had rotted away leaving empty cement post holes filled with fallen leaves. 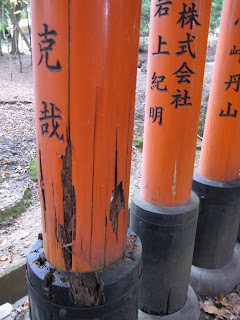 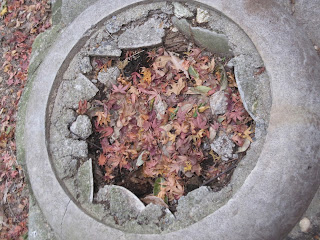 The calm and quiet of the surroundings and the walk did me the world of good after days of bonding with my computer in frenzied prep for my talk. 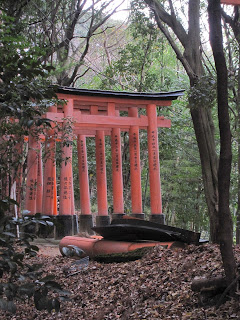 But all too soon it was time for me to head back to Kyoto and, as the rain began to fall, I bought omiyage in one of the station's stores and snagged the last empty seat on my shinkansen back home.

After work one day last week I braved the chilly Tokyo evening, hordes of old men with big cameras and tripods, and young couples with women tripping along in completely useless high-heeled "booties." A pretty little Japanese garden by day, Rikugien does a evening light-up during fall foliage season (and sells yummy grilled rice cake dango with sweet miso or soy sauce... mmmmmm!)

Without a tripod, and not wanting to stop traffic by setting up such equipment even if I had it, most of my pictures turned into fuzzy blobs of bright colour, but the light up is beautiful and the garden well worth a visit at night, or during the day. 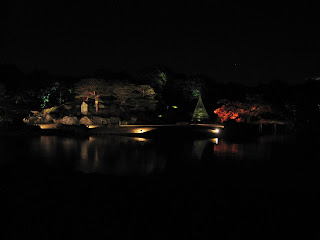 Then walk along lit and semi-lit paths through the forest 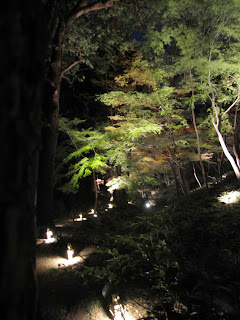 Some trees were lit up from below. 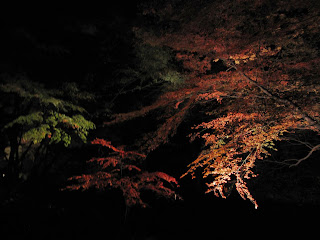 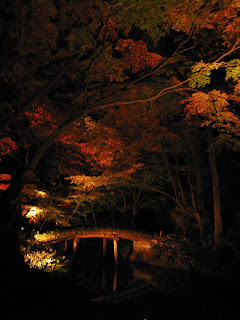 And the stream that used to flow through the garden was brought back through undulating blue lights. 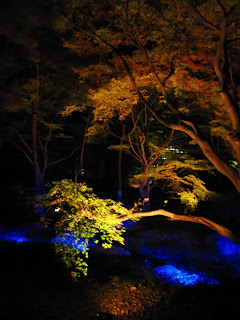 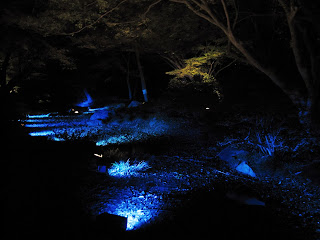 But the best view was one ignored by most visitors - a Japanese maple at the height of its fall glory was a blaze of red and orange, tucked into a corner beside the outhouses by the entrance. Not a single extra-large lens and tripod toting ojisan in sight! 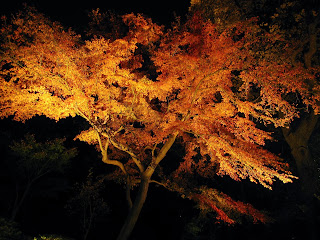 Posted by SomedaysSarah at 11:24 2 comments:

In the shower the other day I noticed an angry looking bruise on my left thigh. I'm a klutz and I bruise quite impressively, but this one was even more colourful than usual.

"No wonder I squeaked at U when he cuddled up to me last night!" I thought to myself.

After my shower I walked into the kitchen to get myself a glass of water. Intent on my drink I wasn't watching where I was going and bashed into the dining table.

"Ouch!" I said to myself and rubbed my thigh, "I'm going to have a brui- ahhH!" Cartoon style, a light bulb had gone off over my head. It sure has taken me long enough to finally realize where the nearly constant bruises on the exact same spot on each thigh have come from.

Maybe it is about time I invested in rubber corners or some sort of padding for the edges of the dining table?
Posted by SomedaysSarah at 16:56 4 comments:

In Canada November 11 is Remembrance Day, a day to think of the sacrifices made by those who fought in WWI and WWII.

In the US the same day  is called Veterans Day and in New Zealand and Belgium it is called Armistice Day.

In Japan it used to be recognized as Armistice Day, prior to WWII it was recognized as a day to think about peace. Now? Well, now it is Pocky and Pretz Day - as the four number 1s lined up look like sticks of pocky or pretz all lined up.

In China it has become known as Singles Day, to celebrate "single sticks" or bachelors.

For U and I November 11 is now our anniversary (or rather one of an increasingly lengthening list thereof). On Monday we filed our paperwork at city hall. Although we will be waiting until next year to hold our wedding ceremony and related receptions, we are now legally married. Anything I have ever heard or read about the process of filing your paperwork to get married at Japanese city hall has said it is anything but romantic. So it was no real surprise to me that it hardly felt like we were actually getting married. We submitted our paperwork, answered questions, filled out more paperwork (and then some more again because we had to merge our two households and our registered addresses differed in the way in which we had written the number of our apartment. U's previous form said "Apartment Name, # X" while mine just said "Apartment Name, X" So before we could merge our households U had to change his address to the same as mine... Or I could have changed mine - and then had to change my foreign resident card)

Then we sat (or I sat and knitted and U wandered about upsetting the staff member set to help poor lost citizens who wandered about city hall without knowing where to go) and waited.

And then we were called up and asked to pay for our requested copies of our marriage registration. We paid, the clerk offered a congratulations, and gave us our change.

And we were married.

(It still seems rather odd and surreal, and we both agreed that whatever the legal record says, we're waiting until our ceremony next fall for our ring exchange and to say that we are married.)
Posted by SomedaysSarah at 14:29 12 comments:

Somedays - U and Me

Somedays I feel sad and lonely,
Somedays I feel fine,
Somedays the clock just ticks too slowly,
And I wish away my time.
But when you come to me,
I realize how wonderful this life can be,
With you, U and me!

SomedaysSarah
A Canadian expat living with her Japanese fiance (U). My musings on my life, Japan, school, work, museums, knitting, Girl Scouts...

"Dreams come true; without that possibility, nature would not incite us to have them."
John Updike

"The emigrant's destiny: The foreign country has not become home, but home has become foreign."
Alfred Polger